The Divine Right of Human Rights*

Human Rights? What are they?

“…All men are created equal, that they are endowed by their Creator with certain unalienable Rights, that among these are Life, Liberty and the pursuit of Happiness.”

Those rights were the essence of the Enlightenment. 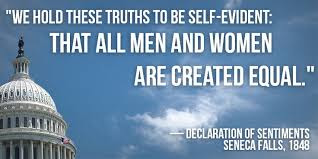 If human rights are truly grounded in the very Nature of Being and Becoming, in the Eternal Essence of Existence, then they are rights which can’t be taken away, except wrongly by force, deception, and intolerance.

Rights are the truism of objective ethics. Yes, humans rights are grounded in Right in the absolute sense. Where ever there are conscious, rational, ethical living species anywhere in the universe, rights will exist.

But because of many factors, some leaders now, instead, try and base human rights on only finite sources. Shaky at best.

Grounding “human rights’ in anything finite whether evolutionary change, certain forms of government, various books, even good united statements such as the UN Declaration of Human Rights is wrong. That’s right. While all of these finite sources are understandable, they are all fraught with problems because they form very insecure foundations.

What human authority can give, it can take away. As it often does.

There’s always a “reason” to deny someone his or her rights. And according to millions of people, it’s always “we” who have the good reasons, and “them” who have the bad reasons.

As far back as Abraham Lincoln (with his denial of legal rights, etc. to pro- Southern legislators and citizens) and even further to John Adams (with the Alien and Sedition Acts), the U.S. government has, repeatedly, managed to justify the denial of human rights.

Indeed, try and think of any U.S. president who didn’t take away rights from citizens illegally and unfairly. I doubt one can find one!

Then think of how this denial of human rights has gone on through the centuries in all other countries as well, often to a very destructive degree. So unwell, so morally sick.

But at least starting with “human rights” as an irrevocable fact/ought/truth based in the very essential nature of ultimate reality is a start.

In the Light of Human Rights,

*Blog Action Day: “Every year since 2007, thousands of bloggers come together for one day to talk about one important issue.”

When I think of Human Rights, I don't think they are "protected" by any governmental law - rather, they are natural rights of all human beings. Unfortunately, human authority often tries - and succeeds - to decide who is more "human" than others. That is a mistake, because the natural order of things usually prevails, and just because it takes longer for nature to make things right, does not mean the consequences are not serious for those who break that order. In the meantime, I strongly believe in the rule, " What's mine is mine, even if it is in someone else's pocket. "

Oh, and thank you for your comment! It means a lot!

Thanks for stopping by and sharing your perspective.