How the Bible Is Like ISIS and HAMAS or Vice Versa

In the Middle East, the tragic news keeps getting worse and more of the same (Is that insane?!).

Consider how so many of the current horrific stories are very similar to stories in the Hebrew Bible of thousands of years ago!

This morning's reading was Genesis 34. Check especially verses 25 to 31, the story of Simon's and Levi's slaughter of a whole town of male civilians, then their theft of all the town 'loot'--including flocks, cattle, donkeys,children, women, etc. 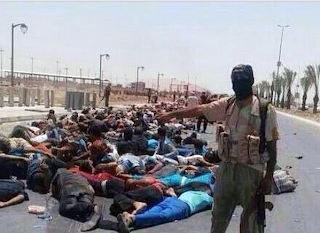 And the central reason for the slaughter by the 2 sons of Jacob has to do with honor versus dishonor and sexuality (a rape by one individual).

Oh, there are a few differences between then and now:
while the Genesis narrative was an oral tradition which finally got written down after hundreds of years about 700-500 BCE, all the gory daily news at present is posted immediately on Twitter, the Internet, YouTube, and so forth.

Of course, I suppose all of this really is old hat if we remember as kids hearing many sermons about the suicide-bomber, Samson, who slaughtered a whole temple of civilians--men and women.

Still that was at least 1100 BCE. A long time ago. Why is HAMAS still killing civilians--such as driving cars into innocent Jewish civilians, murdering Jewish hitchhikers and then celebrating their killers as martyrs?!

The Israelis, also, are doing their part with lying, stealing, and slaughter. But at least they didn't glorify the Jewish individual who murdered the Palestinian teenager in Jerusalem several months ago.

No change from thousands of years ago that I can see.

What happened to the new millennium?

Why are we drowning in an Ocean of Darkness?

Intolerance is the root of all this trouble - whether it's the biblical times or modern. And any intolerance comes from ignorance and fear... Example: if you ask an average person what demons are, they will say, "evil spirits that lead us astray". Yet, the Greek word "daemon" stands for a deity, "an intermediate spirit between god and man"... In the "Goetia" it actually mentions that daemons help a human to control (his own) brain - that part that we have so little control of, what, less than 5 % ? But... most people would rather live in hate and fear. Why? Because it's easier.

And the "intolerance" comes (I think) from humans who "in-turn" as the etymology points out.

Is not life for humans a constant encounter between the selfish possibility versus the generous-out-giving possibility?

Thanks for sharing your perspective.