The Far and the Near of Quakerism

“The Far and the Near” is a powerful short story by Thomas Wolfe, the lyrical American writer.

In the brief story, the narrator tells of how he often passes by a pleasing-looking house and family in the distance. That place and that family seem to epitomize all that is good and hopeful in the world. 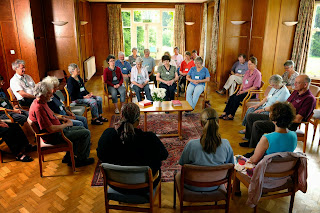 Then, finally, one day the narrator decides to visit the far place. He drives to the distant location, with high hope and deep intensity, expecting to find this warm family and beautiful place, this shining star of joy always, only seen from afar.

But when he arrives, the observer is faced, instead with brute, ugly facts so unlike his hopeful expectations.

“Why had...the very entrance to this place he loved turned unfamiliar as the landscape of some ugly dream? Why did he now feel this sense of confusion, doubt and hopelessness?...with a sense of bitter loss and grief, he was sorry he had come...

All the brave freedom, the warmth and the affection had...vanished...But he faltered on, fighting stubbornly against the horror of regret, confusion, disbelief that surged up in his spirit, drowning all his former joy…”
--

When I was viewing and longing for the Society of Friends from afar, it looked like the true deal in a world awash with destructive and delusionary religion. It seemed an Ideal, Christianity truly lived—weekly real encounter with the Divine, communal communion living within worship and then active peacemaking, etc.

I would often drive long distances in order to participate in Quaker worship. And I did experience a deep sense of God’s presence sometimes, despite the usual quieting of my busy-body mind within.

But when I finally came near—actually lived near a Friends meeting and became an active member, and taught a Quaker class on Friends history and witness, I discovered a significant number of Quakers in the U.S. and England don't even think the Divine exists!

They are nontheists who go to weekly worship to not worship!

And, strangely, it turned out there are many Quakers who actively support war. What?!

California Yearly Meeting (of which my wife and I were devoted members) strongly refused to oppose nuclear weapons at its yearly conference!

Instead, members and leaders got up and defended not only regular war, but the possession and threat of atomic bombs!

I went home very troubled and disillusioned. How Far Quakerism in Southern California was from the Near of the Ideal.

There was an intentional willingness for killing in some “liberal” meetings, too!

Once I so wanted to be “near” that my wife and I drove over 2 hours to a liberal Friends meeting only to have members there speak up in the meeting in support of killing! Later, the AFSC in some cases even supported war.

My wife, who wasn't diligently a Friend but more a ride-along:-), wondered why we had bothered.

Then later after we joined a Friends Meeting, finally really got regularly “Near,” our local meeting hired an active fighter pilot as its leader…
Then it got even worse.

“Something is happening here, and we don’t know what it is, do we Mr. Fox?” (to misquote Dylan, Bob not Thomas).

Where was the beautiful spiritual home and family I had pined for so long?

Not that I wasn't also most of the problem...

But I was seeking help and spiritual communion for my own suffering life, not another secular gathering, that denied the Transcendent, or one which would be as gung-ho for war as most religions.

However, I said to myself--and many others--despite all these tragic developments, true Quakerism isn't like this.

What we need to do is get back to the real and true early movement of the Friends. That true Quakerism of Far in the past, the 1640’s. 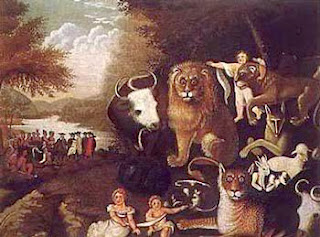 But then I came face to face with textural evidence that early Quakers weren't like the Ideal either.

George Fox even called on the Puritan warlord Oliver Cromwell to extend the English Civil War into continental Europe!

From “Militant Seedbeds of Early Quakerism:
“Consider this message to Cromwell, signed “George Fox” and dated January 1658, where the Protector is lambasted for not carrying his military conquests into Europe and on to Rome itself—even to the Turkish empire:

“Oliver, hadst thou been faithful and thundered down the deceit, the Hollander had been thy subject and tributary, Germany had given up to have done thy will, and the Spaniard had quivered like a dry leaf wanting the virtue of God, the King of France should have bowed his neck under thee,
the Pope should have withered as in winter,
the Turk in all his fatness should have smoked,
thou shouldst not have stood trifling about small things, but minded the work of the Lord
as He began with thee at first...Let thy soldiers go forth...
that thou may rock nations as a cradle.”
George Fox

For, not, heaven’s sakes, even Quakerism’s Margaret Fell said
that the English Puritan army was “the Battle-axe in the hand of the Lord.”
http://universalistfriends.org/library/militant-seedbeds-of-early-quakerism

Does anyone want to say, “Amen”?

The Far is no way Near, or rather is so like the Near.

I wonder why all religions at some point are given to violating others,
to carnage, even those who claim they are for peace.

Maybe, it’s not just religion, but that war and violence are inherent in the natural order
as scientists from Charles Darwin to Richard Dawkins have emphasized.

So that’s the Far and the Near.

And it’s an experience of disillusionment which leads if not overcome, to living with despair or illusion.

However having said all that, I see, despite my severe disillusionment with the Near and the Far of Quakerism that I still come out as a Quaker on Belief.net's Survey, 100% Liberal Quaker in fact.

This surely is the time to take a little encouragement from Howard Zinn, an American historian, who points out that despite the horrors of actual history and the way most people live,
“ TO BE HOPEFUL in bad times is not just foolishly romantic. It is based on the fact that human history is a history not only of cruelty, but also of compassion, sacrifice, courage, kindness."

"What we choose to emphasize in this complex history will determine our lives...If we remember those times and places...where people have behaved magnificently, this gives us the energy to act, and at least the possibility of sending this spinning top of a world in a different direction."

"And if we do act, in however small a way, we don’t have to wait for some grand utopian future. The future is an infinite succession of presents, and to live now as we think human beings should live, in defiance of all that is bad around us, is itself a marvelous victory.”
― Howard Zinn

So, for us, so what if the “near” of Quakerism isn't what it appears at the “far,” and even the “far” wasn't nearly as wonderful or divine as we like to historically remember?

Let’s live for the Good, the True, and the Just and the Merciful and the Kind in the present.

Become what Quakerism should have been, should be now.