Probably no one needs more sordid details about 32-year-old Alabama district attorney Roy Moore's alleged molestation of a 14-year-old girl. Or that Moore told the young teen's mother that he would watch out for her! 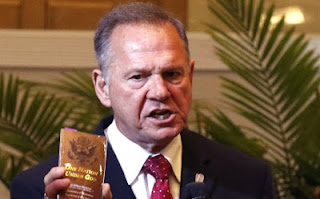 So, let's skip to some very Kurt-Vonnegut sort of commentary on this moral debacle, neither moore nor less:

Infidel753 already has made a number of very strong points on his web blog. For instance, he wrote, "What's striking to me is how closely the divide over Moore on the right correlates with the religious/secular divide. The very people who generally exhibit an outright obsession with Christianity's sexual taboos are going all out to defend a man plausibly accused of sexual misbehavior..."

It's even more absurd than that. Because in the past Christian leaders obsessed on Bill Clinton (and others) "sexual misbehavior" BUT
all of those ethical choices were
with adults.

Even Christian leaders' past defense of Newt Gingrich (who twice committed adultery, once when his wife at the time was dying of cancer!:-( isn't as bad as this current hypocrisy.

This Christian defense of Moore is much more like the Roman Catholic leaders' responses to priests having sexual relations with young teens.

How could anyone defend such immoral, unjust actions against innocent young teens?!

How can so many Christian defend a famous Christian leader, former Alabama Supreme Court Judge who in the past, when a 32 district attorney, committed alleged sexual relations with a 14-year-old and made unethical advances to other teen girls.
(Of course, his legal 'out' is that he, Moore, didn't go all the way. BUT
that was also true of the priests who molested young teens.)

So really nothing new here.

Christian leaders have been defending fellow Christians who engage in serious sexual misconduct for many years.

BUT WHAT DOES surprise me is the nearly complete condemnation of Ray Moore's actions by secularists (after you ferret out their hostility to right-wing politics).

Instead they assert that all ethics are "subjective," even raping, enslaving, slaughtering!! All ethics are only "personal preference" or opinion.

Some even claim that various unethical actions are only about "like" or "dislike."

According to these secularists, enslavement,
slaughter,
rape,
dishonesty,
little girl mutilation, etc.
are no different than liking (or not liking) coffee or tea or soda.

ON THE CONTRARY:
All humans need to promote the view of the Humanist Manifesto III, the UN Declaration of Human Rights, the Enlightenment view of thinkers such as Thomas Paine--
that humans have "inherent value."

THAT ethics are real!

Deeply troubled in this "ocean of darkness" that corrupts and poisons the religious and secular world today.

Posted by Daniel Wilcox at 8:28 AM