On this Eve, Please Write for Those Suffering in Eastern Ghouta, Syria

"14 individuals have died since July in Eastern Ghouta, as the Syrian government blocks their medical evacuation and those of another 572 other severely injured and ill people. More deaths are expected if authorities do not approve their immediate evacuation to hospitals in Damascus...and cases of acute malnutrition." Damascus is "just 10 kilometres away..." 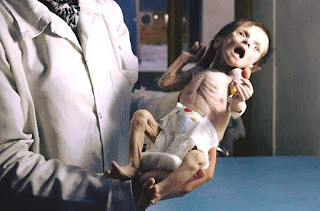 
"According to medical personnel in Eastern Ghouta, an area near Damascus where government forces have been holding around 400,000 civilians under siege, 14 people have died while awaiting medical evacuation. The medical evacuation of 572 people suffering from severe injuries and chronic diseases has been pending approval from the Syrian government since July."

"According to the testimonies, a majority of patients can be saved with basic medical supplies that are available in Damascus, just 10 kilometres from Eastern Ghouta. No medical evacuation has been allowed so far."

"Doctors and medical workers are unable to provide adequate medical care to the injured and ill due to lack of adequate surgical supplies, medical equipment and medicine, particularly for treatment of chronic diseases such as cancer, heart disease, and diabetes."

"As a result, doctors are using expired medicine from destroyed hospitals. There has additionally been a rise in cases of acute malnutrition, especially in children, exacerbated by the lack of access to food, humanitarian aid, and other life-saving necessities."

1) TAKE ACTION
Write a letter, send an email, call, fax or tweet:
 Calling on the Syrian government to immediately lift the siege on Eastern Ghouta;
 Urging it to unconditionally allow medical evacuations to Damascus;
 Calling on it to provide unfettered access to UN humanitarian agencies and their implementing partners.

President
Bashar al-Assad
Fax: +963 11 332 3410 (keep trying, if it does not go through, include your message to the president in an e-mail to the Ambassador, asking for it to be forwarded)
Email: syria.pr@outlook.com
Salutation: Your Excellency

Posted by Daniel Wilcox at 7:37 AM