1
FLOOD-TIDE below me! I see you face to face!
Clouds of the west—sun there half an hour high—I see you
also face to face. 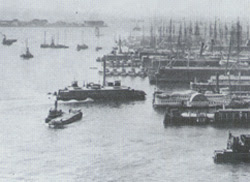 Crowds of men and women attired in the usual costumes, how
curious you are to me!

On the ferry-boats the hundreds and hundreds that cross,
returning home, are more curious to me than you suppose,

And you that shall cross from shore to shore years hence are
more to me, and more in my meditations, than you might
suppose.

2
The impalpable sustenance of me from all things at all hours of
the day,
The simple, compact, well-join'd scheme, myself disintegrated,
every one disintegrated yet part of the scheme,
The similitudes of the past and those of the future,

The glories strung like beads on my smallest sights and hearings,
on the walk in the street and the passage over the river,
The current rushing so swiftly and swimming with me far away,

The others that are to follow me, the ties between me and them,
The certainty of others, the life, love, sight, hearing of others.

Others will enter the gates of the ferry and cross from shore to
shore,

I am with you, you men and women of a generation, or ever so
many generations hence,
Just as you feel when you look on the river and sky, so I felt,
Just as any of you is one of a living crowd, I was one of a crowd,

Just as you are refresh'd by the gladness of the river and the
bright flow, I was refresh'd,
Just as you stand and lean on the rail, yet hurry with the swift
current, I stood yet was hurried,
Just as you look on the numberless masts of ships and the thick-
stemm'd pipes of steamboats, I look'd.

I too many and many a time cross'd the river of old,
Watched the Twelfth-month sea-gulls, saw them high in the air
floating with motionless wings, oscillating their bodies,

Saw how the glistening yellow lit up parts of their bodies and left
the rest in strong shadow,
Saw the slow-wheeling circles and the gradual edging toward the
south,
Saw the reflection of the summer sky in the water,

Had my eyes dazzled by the shimmering track of beams,
Look'd at the fine centrifugal spokes of light round the shape of
my head in the sunlit water,
Look'd on the haze on the hills southward and south-westward,
Look'd on the vapor as it flew in fleeces tinged with violet,
Look'd toward the lower bay to notice the vessels arriving,

Saw their approach, saw aboard those that were near me,
Saw the white sails of schooners and sloops, saw the ships at anchor,
The sailors at work in the rigging or out astride the spars,
The round masts, the swinging motion of the hulls, the slender
serpentine pennants,
The large and small steamers in motion, the pilots in their pilot-
houses,

The white wake left by the passage, the quick tremulous whirl of
the wheels,
The flags of all nations, the falling of them at sunset,
The scallop-edged waves in the twilight, the ladled cups, the
frolicsome crests and glistening,
The stretch afar growing dimmer and dimmer, the gray walls of
the granite storehouses by the docks,

On the river the shadowy group, the big steam-tug closely flank'd
on each side by the barges, the hay-boat, the belated
lighter,
On the neighboring shore the fires from the foundry chimneys
burning high and glaringly into the night,

Casting their flicker of black contrasted with wild red and yellow
light over the tops of houses, and down into the clefts of
streets.

4
These and all else were to me the same as they are to you,

I loved well those cities, loved well the stately and rapid river,
The men and women I saw were all near to me,
Others the same—others who look back on me because I look'd
forward to them,
(The time will come, though I stop here to-day and to-night.)

What is it then between us?

What is the count of the scores or hundreds of years between us?

Whatever it is, it avails not—distance avails not, and place avails
Not...

Not sure when I first encountered this powerful poetic meditation on Life, time, place, travel, and death...

The first time I remember was when I introduced it to recalcitrant students at Westminster High School in the fall of 1979 during my student teaching...
and strangely there I encountered one of those transcendent ALIVE moments that sometime occur in our life, and shock us awake! But then shortly afterward--a few several weeks--one of the first "deaths" of hope struck my life. I was still an idealistic, naive individual, though I was 32 years of age, traveling late into my career because of the wanderings and wonderings of my 20's.

Somehow, someway, the day I stood amidst the desks, orally interpreting Whitman's prescient awareness of the relationship between him and the people of his day and those of future times who read his poem...
somehow
for some students, and especially myself, I encountered one of those deeply alive times when I experienced that wide consciousness which Whitman refers,
a vivid awareness which explodes out from our usual unaware, hum-drum daily life--

A moment in which suddenly we are so aware that place and time even "...hundreds of years...avails not"...

Posted by Daniel Wilcox at 4:33 PM