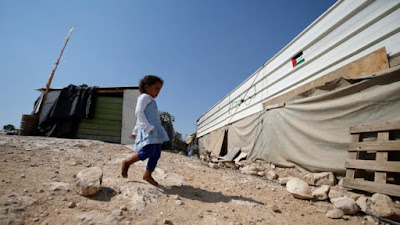 AI: "Responding to the Israeli Supreme Court’s decision, the second one in less than two months, to approve the demolition of Khan al-Ahmar, by rejecting the desperate last resort petitions from residents of the West Bank village, Saleh Higazi, Head of Office in Jerusalem for Amnesty International, said:

“With this shameful and manifestly unlawful ruling the Supreme Court has confirmed a pattern of complicity in the crime of forcible transfer of Palestinian communities for the expansion Jewish-only settlements. The court has not only completely denied the petitioners the protection provided to them by International Humanitarian Law, it has also validated the discriminatory policies of the Israeli authorities.”

“If the international community does not immediately take the necessary action to stop this crime from taking place, thousands of other Palestinians surrounding Jerusalem and in the Jordan Valley will now face an imminent risk of forced displacement...”

"Forcible transfer of people under occupation is a serious breach of the IV Geneva Convention. The deportation or transfer of all or parts of the population of the occupied territory within or outside this territory constitutes a war crime under Article 8 of the Rome Statute."

Read the rest at:
https://www.amnestyusa.org/press-releases/israeli-court-approves-a-war-crime-by-ruling-in-favor-of-demolishing-the-entire-village-of-khan-al-ahmar/

"Israel's Supreme Court has rejected appeals against the demolition of a Bedouin village in the occupied West Bank whose fate has been a subject of international concern.

Judges upheld an order to raze Khan al-Ahmar, where about 180 people live in shacks between two Jewish settlements.

Israel's government says the structures were built illegally, but Palestinians say permits are impossible to obtain.

An injunction against the demolition will expire within seven days.

The United Nations has called on Israel to allow the Bedouin to remain on the land, saying such demolitions are against international law."

Palestinians AND THEIR LEADERS have no moral ground either becaise they reward families of terrorists, and praise the murderers, including the Muslim jihadist who executed a 17-year-old girl in her own bedroom!

HOWEVER, that doesn't justify Israelis invading Palestine, destroying structures including a school, and stealing Palestinian water and land!

PLEASE STAND UP AND WRITE OPPOSING THESE IMMORAL, UNJUST ACTIONS.

Posted by Daniel Wilcox at 5:29 PM