Thich Nhat Hanh is a Vietnamese Engaged Buddhist monk. During his difficult life in Vietnam, he endured all sorts of hardships, including the killings of family members and friends by the French, American, and Vietnamese military.

An orphanage that he started was bombed!

And yet, he is a walking example of joy and gratitude, despite the horrors and tragedies. 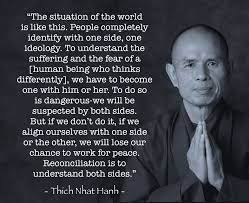 During the long conflict, he led many thousands of Vietnamese young people in reconciling work among civilians harmed by the fighting.
Martin Luther King nominated Nhat Hanh for the 1967 Nobel Peace Prize for his work of nonviolence and peacemaking.

In the mid-70’s, he helped rescue Vietnamese escaping from Vietnam.

Even in the worst events, Nhat Hanh would ask himself what he could be thankful for even if it was only the blue sky and brown earth, and that he was still breathing.

“Suffering is not enough. Life is both dreadful and wonderful. How can I smile when I am filled with so much sorrow? It is natural—you need to smile at your suffering because you are more than your sorrow.” Thich Nhat Hanh

Posted by Daniel Wilcox at 6:20 PM