"Around the world, people who leave the faith of Islam face state persecution, imprisonment, torture, and even execution, as well as violence, death threats, and ostracization from their own communities."

In many Muslim families the father or older brother or relative will even kill a family member who rejects the faith.

I'm a theist and against atheism, but this insightful video is a heart-breaker showing the evil of religion, particularly Islam. 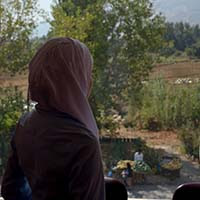 Let us open our hearts and wallets to help those persecuted and impoverished, those escaping from the horror of war and religious persecution.

Please write your U.S. Senators and Representatives to support the acceptance of Syrian refugees and other refugees escaping from the Muslim slaughter in the Middle East.

Please urge the U.S. Government to admit at least 250,000 refugees (anyone who will agree to support human rights and freedom of religion for everyone, even for those who reject Islam).

For those desperate refugees (who are strict Muslims, who oppose human rights and oppose the freedom of apostasy), even they need help, so seek to send basic aid to them in the Muslim countries where they are stranded and in need.

Reach out to all in the Light,

Posted by Daniel Wilcox at 8:09 PM