To Other Sentient Species 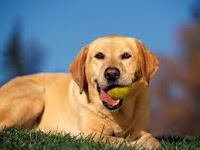 Our yellow pup pulling on her collared leash,
In the verdant high rolling hills near Fairfield,
We wind along a ribbon of gravel,

Two humans and their best friend, at a dogtrot,
Our weaving trail sequestered
In the intertwining valleys of centered Cal,

Between rustic farms and suburban homes,
Below the cattle-grazing heights.
Yes, we fast-pace this pedigreed path

As it lolls through lush withered grass near sunset,
The corona of Sol's glow on the coastal range cresting, lowing
With scattered cattle on the heightened bluffs to the west.

We take a 'paws' at a cross path to hug and brush
Our Golden Lab pup who pulls and rushes off
To chase a stick, "Atah boy, Yellow."

At this juncture, stands a large pole stump
Banded with 33 canine collars in various rainbow
Shades and dangled metal ornaments like some modern totem;

It's a pooch memorial for the deceased barkers
Of the past who have sniffed this trail month after month.
And now we new dog-carers, hurry past,

Out for another sunset dog-pulled stroll,
A couple yanked along forward by their hound;
But as we leave from this canine shrine

Headed into the descending spread
Of the suburban shaded dusk,
Yellow noses along the trail.

I, in a muttering, 'tailing' mood,
Reminisce about those collars,
Lean over to my wife and whisper low,
"Doggone it."

Wild from Alaska—my taste buds buzzed into singing,
But the stupid phone in the kitchen rang yanking me.

I dropped my creamy spoon and rushed through the open door--
Wrong number! Frustrated, I slammed down the white thing,

Tended to nagging errands clanging for attention;
But then came a loud slurp...slurping 'round the den corner.

Oh, no! I rushed back to the aromatic room
And there crouched Fizzy, our calico, her cream-rootbeer 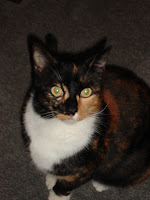 Taking it easy, zooming down 101,
California-coasting on a 3 dog night— 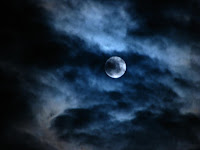 Doing under 10 in the fast lane;
Where's the eye-goggled wreck?

Howling down, not running the moon

Lo and hold; up ahead, a small mongrel,
Only a small blurred bush of fur

Paws down the lighted pavement
In front of a Honda Civic lady;

The rest of us, ‘paused’ gas-guzzlers hank
Down until a Ford trucker swerves

Off the un-freeway, jumps out
And grabs for the pacing pooch,

But the small canine switches lanes,
Into the dogged night, an Indy pacer,

Ahead of our growl on the paved terrain
--One lone whelp, our night’s highway terrier.

Howling down the highway, outrunning the moon

First pub. in The Write Room
in different form

Posted by Daniel Wilcox at 3:44 PM