From Amnesty International:
"As many as 5,000 women and girls are murdered each year in so-called 'honor killings.' That's 13 lives a day.

An honor killing is the murder of a person accused of 'bringing shame' on their family or community."

"Victims are murdered for a variety of reasons, including talking to an unrelated male, rejecting a marriage partner chosen by family members, committing or being accused of adultery, becoming pregnant out of wedlock, not dressing conservatively enough, and even being a victim of rape." 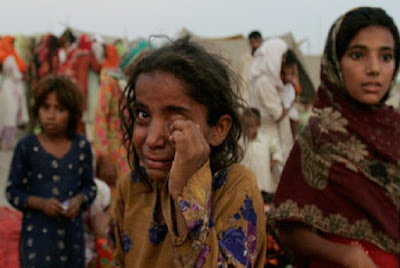 "Shockingly, murderers in some cases actually get reduced sentences in cases when honor is the motivation."

"Tell President Obama to make a statement on March 8, International Women’s Day, expressing concern for the safety of women worldwide and strong support for women’s human rights, including the right to be free from violence."
Amnesty International
https://act.amnestyusa.org/ea-action/action…

Culture of Discrimination: A Fact Sheet on “Honor” Killings by Amnesty International

"Istanbul, Turkey -Ignoring the pleas of his 14-year old daughter to spare her life, Mehmet Halitogullari pulled on a wire wrapped around her neck and strangled her - supposedly to restore the family's honor after she was kidnapped and raped..."

“I decided to kill her because our honor was dirtied,” the newspaper Sabah quoted the father as saying. “I didn't listen to her pleas, I wrapped the wire around her neck and pulled at it until she died” (The Associated Press).

Every year around the world an increasing number of women are reported killed in the name of “honor”. Relatives, usually male, commit acts of violence against wives, sisters, daughters and mothers to reclaim their family honor from real or suspected actions that are perceived to have compromised it.

Due to a range of factors, including discriminatory attitudes and beliefs about women, officials often condone or ignore the use of torture and brutality against women. As a result, the majority of so-called honor killings go unreported and perpetrators face little, if any, consequence.

Although “honor” killings are widely reported in regions throughout the Middle East and South Asia, United Nations Special Rapporteurs on Extrajudicial, Summary and Arbitrary Executions have reported that these crimes against women occur in countries as varied as Bangladesh, Brazil, Ecuador, Egypt, India, Iran, Iraq, 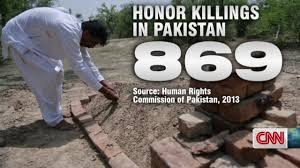 There have also been incidents of honor killings reported in the United States and Canada. In September 2000, the United Nations Population Fund (UNFPA) estimated that as many as 5,000 women and girls are murdered each year in so-called honor killings by members of their own families.

• Article 1 of the UN Declaration on the Elimination of Violence against Women proclaims “the term ‘violence against women’ means any act of gender-based violence that results in, or is likely to result in, physical, sexual or psychological harm or suffering to women, including threats of such acts, coercion or arbitrary deprivation of liberty, whether occurring in public or in private life.”

• The Convention on the Elimination of Discrimination of All Forms Against Women (CEDAW) concludes that “…State Parties [should] take all appropriate measures […] to modify the social and cultural patterns of conduct of men and women, with a view to achieving the elimination of prejudices […] and all other practices which are based on the idea of inferiority or the superiority of either of the sexes or on stereotyped roles for men and women.”

• CEDAW General Recommendation 19 clarifies that traditional public and private ideologies that regard women as “subordinate to men” and seek to “justify gender-based violence as a form of protection or control” deprive women of mental and bodily integrity.

• The Platform for Action on Women’s Human Rights from the UN Fourth World Conference on Women calls upon states to “take urgent action to combat and eliminate violence against women, which is a human rights violation resulting from harmful traditional or customary practices, cultural prejudices and extremism.”

• The International Covenant on Civil and Political Rights (ICCPR) asserts that “every human being has the inherent right to life” in addition to “the right to liberty and security of person."

The Concept of Honor

"So-called honor killings are based on the deeply rooted belief that women are objects and commodities, not human beings entitled to dignity and rights equal to those of men.

Women are considered the property of male relatives and are seen to embody the honor of the men to whom they “belong”.

Women's bodies are considered the repositories of family honor.

The concepts of male status and family status are of particular importance in communities where “honor” killings occur and where women are viewed as responsible for upholding a family’s “honor.”

If a woman or girl is accused or suspected of engaging in behavior that could taint male and/or family status, she may face brutal retaliation from her relatives that often results in violent death.

Even though such accusations are not based on factual or tangible evidence, any allegation of dishonor against a woman often suffices for family members to take matters into their own hands.

Convicted killers often speak with defiant pride and without regret about their actions. "We do not consider this murder," said Wafik Abu Abseh, a 22-year-old Jordanian woodcutter who committed a so-called honor killing, as his mother, brother and sisters nodded in agreement. "It was like cutting off a finger."

Abdel Rahim, a convicted killer who was released after two months, also said he had no regrets. "Honor is more precious than my own flesh and blood”(New York Times).

What can precipitate an “honor” killing?

Women and girls can be killed for a variety of behaviors. This can range from talking with an unrelated male to consensual sexual relations outside marriage to being a victim of rape to seeking a divorce or refusing to marry the man her family has chosen for her. Even the suspicion of a transgression may result in a killing.

AI received a report of a man who killed his wife on the basis of a dream he had about her committing adultery. Women have been killed for ostensibly disrespecting their husbands.

In one case, a woman was beaten to death for not performing her domestic duties quickly enough. Women may also be assaulted physically but not killed.

When they attempt to seek help from law enforcement, they may be disbelieved or they may be discredited by officials who support prevailing discriminatory attitudes towards women.

Some countries have passed laws that allow lesser penalties for men who kill "in the name of family honor".

In others, the police may be bribed by the family of the killer to ignore attempts to report the killing as a murder.

In 1999, twenty-nine year old Samia Sarwar was shot dead in her lawyer's office in Lahore.

Her parents instigated the murder, feeling that Samia had brought shame on the family by seeking divorce after 10 years of marital abuse.

Although the perpetrators can be easily identified, not one of them has been arrested. Instead, her lawyer, Hina Jilani, and her colleague, Asma Jahangir, have been publicly condemned and received death threats.

So-called honor crimes occur in societies in which there is interplay between discriminatory tribal traditions of justice and statutory law.

In some countries this is exacerbated by inclusion of Shari'a, or Islamic law, or zina (sex outside of marriage) as a crime within statutory law.

Due to women's enforced seclusion, submission to men and second-class citizenship, women seldom know their rights under national or international law, and rarely have a chance to defend themselves in a court of law.

Local law enforcement officials often turn a blind eye or fail to enforce significant punishments for the murder of women.

Police and members of the public may help the killer's family cover up the murder by refusing to register it as a crime, or by delaying long enough to allow the killer to escape the vicinity.

In countries such as Jordan, Afghanistan, and Pakistan, any form of immorality, whether adultery or rape, is considered a way of dishonoring the family and may lead to “honor” related violence.

So-called honor killings are part of a community mentality. Large sections of society share traditional conceptions of family honor and approve of “honor” killings to preserve that honor.

Even mothers whose daughters have been killed in the name of honor often condone such violent acts.

Such complicity by other women in the family and the community strengthens the concept of women as property without personal worth. In addition, communal acceptance of “honor” killings furthers the claim that violence in the name of honor is a private issue and one to be avoided by law enforcement.

Community acceptance of these killings stifles accurate reporting of the number of violent crimes against women in the name of honor.

As a result, the true extent of the prevalence of “honor” killings is still not fully known.

“It is an unholy alliance that works against women: the killers take pride in what they have done, the tribal leaders condone the act and protect the killers and the police connive the cover-up.”
Nighat Taufeeq of the women’s resource center Shirkatgah (Lahore, Pakistan).

"The murder of women in the name of “honor” is a gender-specific form of discrimination and violence. In societies where so-called honor killings are allowed to occur, governments are failing in their responsibility to protect and ensure women their human rights.

“Honor” killings should be regarded as part of a larger spectrum of violence against women, as well as a serious human rights violation.

Amnesty International calls on you to help bring an end to “honor” killings, and to demand that governments take steps to ensure that women and men enjoy equal treatment under law.


Please work against this dishonorable belief,