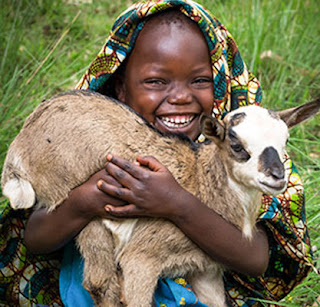 Did you hear about the Friendly city animal lover who kept goats in his garage, manger and all?

Angry Neighbor: “I keep hearing bleating noises coming from your garage. What gives?”

Quaker: “Let me ‘goat’ check. Moments later—“Oh that was just the little one wanting her nanny.”

Quaker: "You can’t get my goats. I kid you not.

"We're sending them to the Middle East to help a refugee family. Mother and kid will bring some stableness to that angry place. You remember, don’t you, that goats calm others*. Maybe the Palestinians and Israelis need to raise them."

"Maybe, you would you like to borrow our goats for this Eve?"

"It won’t be a silent night though!"

A.N.: “Bleepbleep#$%X! What’re you talking about? You can’t keep animals in this neighborhood."

Quaker: “Sorry. Did you ever see that old western, Have Goat, Will Travel?"

Idiomatic Expression: Get your goat."
*"The Phrase Finder concludes that the saying is distinctly American dating back to 1909 and sticks by the “commonly repeated story which purports to explain the phrase’s origin is that goats were placed with racehorses to keep them calm. When ne’er-do-wells who wanted the horse to race badly removed it, i.e. they ‘got someone’s goat’, the horse became unsettled and ran badly.” The site admits, though that there’s no evidence to support this etymological tale."

"...Ye Olde English Sayings discusses the origins of “getting your goat” with reference to “an old English (Welsh?) belief that keeping a goat in the barn would have a calming effect on the cows, hence producing more milk. When one wanted to antagonize/terrorize one’s enemy, you would abscond with their goat rendering their milk cows less- to non-productive.

Whether the phrase is English or American, the common thread is “goats as the great calmers of nature.”
http://goatberries.com/2011/03/the-origins-of-get-your-goat/

In the heavenly noise;-)