"Unless man [humanity:-*] can develop his[her] interior dimensions in such a way as to form a dyke against the floods from the world without, he will become engulfed in the world of nature and sink back to the subhuman level whence he long ago emerged."
Howard H. Brinton, Friends for 300 Years, 1952

How true this warning has become. In his brilliant book in 1952,
Friends for 300 Years, Brinton demonstrated not only insight
but prophetic foresight as to the future dangers of lopsided and
even delusionary philosophy/religion/ethics.

Surely, I need not document in detail more than I already have
(in the past few months of commentaries and reflections on this
blog) how modern American society--despite a few advances
including upholding rights for all humans--has seeped tragically
into relativism and subjectivism in ethics,
how so many smart educated humans
now claim that ethics are only
"personal preferences."

As bad as the 1950's were in many ways, most Americans including
Friends thought that there was objective good and evil, ultimate
truth, and that the Light is real, not a subjective experience.
Not so for many now in the darkening end of 2015.

But Brinton in the book offers
the complex answer of the Good News
as well.

According to Brinton, there are 4 key essentials in true religion:
"The best type of religion is one in which the mystical, the evangelical, the rational, and the social are so related that each exercises a restraint on the others. 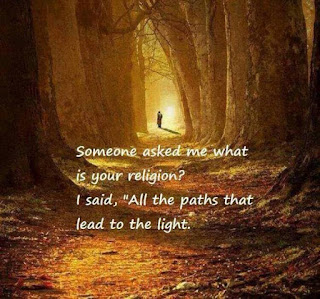 --Too exclusive an emphasis on mysticism results in a religion which is individualistic, subjective, and vague;

--too dominant an evangelicalism results in a religion which is authoritarian, creedal, and external;

--too great an emphasis on rationalism results in a cold intellectual religion which appeals only to the few;

--too engrossing a devotion to the social gospel results in a religion which, in improving the outer environment, ignores defects in the inner life which cause the outer disorder.

In Quakerism the optimum is not equality in rank of the four elements. The mystical is basic. The Light Within occasions the acceptance or rejection of a particular authority, reason, or service." (pages 203-205, Friends for 300 Years by Howard H. Brinton, Pendle Hill)
--

While agreeing with Brinton so much in this book, I do disagree with his last statement--that "The mystical is basic. The Light Within..."

I'm not disagreeing with him or any other thinker in the sense that ultimate reality doesn't precede the rational but that for so many Quakers and other humans now, "mystical" has become another "empty-bucket" word which means a million different things. And has become primarily to mean something individualistic and postmodern.

If everyone were to use the term "mystical" in the Merriam-Webster Dictionary sense, then I would agree:
"Full Definition of mystical
1
a : having a spiritual meaning or reality that is neither apparent to the senses nor obvious to the intelligence...
b : involving or having the nature of an individual's direct subjective communion with God or ultimate reality..."

--
*How dated 60-year-old books seem now with their un-egalitarianism language. It isn't surprising when one sees it in most books, but to see the old usage in a Friends' seminal work does shock, since Friends have emphasized equality to one degree or another for over 365 years. On the other hand, the "man," and "he's" were linguistic convention, probably something that Brinton didn't even notice.
Posted by Daniel Wilcox at 11:12 AM