"Fox digged out of his Burrows" and other C.Q.H.;-) Fractured As Usual

A city Quaker from an Evangelical Friends church was talking with a Quaker from a Friends meeting in the country. "You are in violation of our Faith and Practice!"

"On the contrary, dear Friend, maybe it would be good if you re-read the words of the son of man. It's in Luke 12:14, "But he said to him, 'Man, who appointed me a judge or arbitrator over you? Beware, and be on your guard against every form of creed;
for not even when one has an abundance does his life consist of his propositions.'”

"What?! I don't remember Jesus saying anything like that in Matthew." The Evangelical grabbed up his Bible and began leafing through the pages.

"Look it up, City Friend. You may think we liberals are country heretics, a bunch of Hicks, but we seek the Light." Then the Friendly farmer walked away smiling.

At the Underground Railroad history museum, the guide, a descendant of Levi Coffin, held up a wooden bowl and spoke to a junior high group of teenagers, “This is the very bowl that Levi Coffin’s wife used to feed runaway slaves hidden in a secret compartment in their house.”

Several students, murmured, “Wow,” a few looked bored, and someone loudly whispered, “If only I had my cell phone! I wish--”

“To uh-bowl-ish slavery with that very dish!” interrupted a bright kid in the back.

Some of the teens broke into laughter, and so did the guide.

Do you know why the Quaker sailors on Nantucket Island could get their ships cleaned up fast?

They had plenty of mussels.

One Quaker student to another:

“Consider how many women among Friends worked for women’s rights based on spiritual truth. For instance, do you remember reading about Susan B. ‘At-the-knee’?" asked the girl in a North Face hiking vest, smiling.

"Sure," said the petite girl next to her, missing the friendly pun.

"She must have kneeled to pray all the time," the North Face girl added, snickering. “Furthermore, think how far we women have progressed since. Why we even have a ‘Hillary’ who is seeking the ‘ever-most’ peak of her career, trying to set a new ‘precedent.’”

“Wait a minute, Hilary’s not a Quaker; she’s a Methodist!”

“Ah, there is madness in my method-dist thee not see;-)?” and the first girl broke out laughing.

Did you see the dog kennel in Quakertown, Pennsylvania? The large sign outside proclaims, “There is that of dog in everyone.”

"If you don't listen to or play gangsta rap or hip hop, what music do you Friends listen to, then?' asked the skinny teen, tapping time to his I-Pod."

"Stupid! But I get yer lame jokes, even 'rapt' for 'rap,' except what does 'rapt' have to do with Quakers?

"You need to read The Journal of George Fox or John Woolman and listen to the spiritual songs of Jon Watts! We're talking spiritual rapture, man. Like the dictionary says, 'transported by spiritual feeling'." 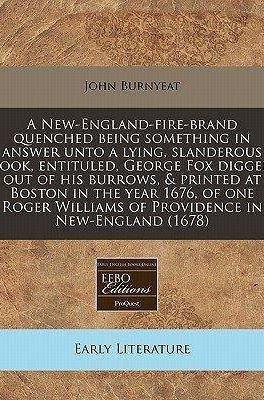 But sometimes word-play humor in history became mean-spirited. There was a long-titled book ridiculing Quakers by punning their leaders’ names, George Fox and Edward Burroughs.

“The old Fox thought it best to run for it, and leave the work to his…” page 5

Burroughs had already died in prison at the age of 29 in 1663. He had been jailed for holding a Quaker meeting. Such religious events were banned by the British government in 1662.

Then the Quakers responded with this long-titled book against Roger Williams:

“A New-England-fire-brand quenched being something in answer unto a lying, slanderous book, entituled, George Fox digged out of his burrows, &c. printed at Boston in the year 1676, of one Roger Williams of Providence in New-England ... : of a dispute upon XIV, of his proposals held and debated betwixt him, the said Roger Williams, on the one part, and John Stubs, William Edmundson, and John Burnyeat on the other at Providence and Newport in Rode-Island, in the year 1672 where his proposals are turn'd upon his own head, and there and here he was and is sufficiently confuted : in two parts : as also, something in answer to R.W.'s Appendix, &c. with a post-script confuting his blasphemous assertions ... : also, the letters of W. Coddington of Rode-Island, and R. Scot of Providence in New-England concerning R.W. and lastly, some testimonies of ancient & modern authors concerning the light, Scriptures, rule & the soul of men / by George Fox and John Burnyeat. [London: s.n.] 1678.”
http://quod.lib.umich.edu/e/eebo/A40216.0001.001/1:4?rgn=div1;view=toc
--

In the 'Lightening' Flash of Punness,